Hiding behind my avatar

I joined twitter on 20th February 2009, three and a half years ago.

At the time I was very skeptical; I had no idea of the effect twitter would have on my professional life or the wealth of contacts I would build up in my Personal Learing Network (PLN). 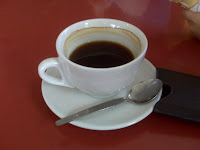 Being a shy individual, an introvert in fact, I felt uncomfortable about using my own photograph for my profile image, so I chose an image that represented me: a cup of coffee. I do like good coffee, and sometimes tweet about it. The image certainly said something about me, as a person. I also felt somewhat protected, lurking on twitter, hiding behind my avatar, thinking I was unnoticed, anonymous in some way.


The cup of coffee lasted for about 6 months, until I met @vonprond at a conference in Galway. In fact, Ferdinand was the first person I followed on twitter. He commented that I looked completely unlike my image: he'd been expecting a large cup of coffee. I realised that my perceived anonymity did not exist and it would not be possible to separate my real life from my twitter existence. 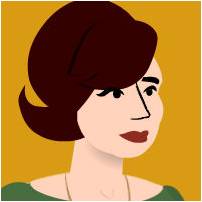 Still being a shy individual and uncomfortable using my own photograph, I created an avatar representing myself using the Mad Men Yourself avatar generator. After a new haircut, this was further updated to my current image, which I've used for about 2 years.

I have been told that I look a little bit like my twitter image (or should that be the other way round?). I have even been recognised at conferences, twice. But it's clear that most people don't recognise me when they meet me in real life. I'm fairly comfortable with that. But, I wonder if I'm still hinding behind the avatar and is it prohibiting me from a deeper engagement with my PLN when I meet them in real life?

In some sense, my twitter persona is an alter-ego of myself. She says things in public that I would never say in a room full of people.

In the last year, or so, I've noticed more of my PLN using photos of themselves, and I'm wondering if it's time to change?

There's another issue. Having used this image for about 2 years, it has now become my "brand". The image, in itself, is recognisable to my followers, even if they don't associate it with the real-life me. Would I be wise to change it now?

And so, dear PLN, I put the question to you. Should I change my profile pic to a real image of myself, or not? Let me know what you think.

Related Post: I got a big response to this article and have written a follow-up, where I explain why I decided not to change my avatar.

Thanks, Sharon, for this post. The fact that 1 cup of coffee lasted six months is worthy of comment alone! I remember it well!

But your post has also made me think more seriously about an issue around being 'introverted' in online, public forums. I am far more shy in online forums than I am walking into a room full of strangers in person. Hitting that 'submit' or 'send' button and then waiting, nervously, for any type of reaction makes me more anxious than walking up to someone I don't know and making small talk (which actually doesn't make me anxious at all). I admire your ability to navigate your online discussions with such ease.

That's just an observation. To answer your question: I think you should put up a photo of yourself. It's the next logical step, just as for me the next step is to be brave and hit the 'submit' button now :)

I do find that having an online persona has helped me in real-life group situations, when I already "know" people from twitter. I suppose it gives me a basis upon which to start a conversation.

I am incredibly bad at small talk. It's a skill that I have never been able to acquire. Being in a room full of strangers is, for me, a nightmare. So, it's good to be able to identify a friend, even if it's somebody I've never actually met before.

Still thinking about the photo!

Hi Sharon - I thought long and hard about this myself last year, and came to the same conclusion as you ... it's too late to change it really as the avatar is me and I am my avatar. I am recognised (virtually) by the image, even if everyone does a double-take when I introduce myself in person. It is also a great talking point and helps to find a relaxed tone for conversations at conferences or in situations where I don't know anyone.

Don't change it, it's part of you now. Embrace your avatar, I love it how it is!!

Thanks David. At least we'll recognise each other at conferences;-)

I agree with David, actually. You've built a 'brand' and you've developed a personality that is associated with the avatar you've chosen., I think it's fine to stick with it to be honest.

Just got talked into using my 'real' pic. I never had any qualms about anonymity but used an avatar because of security reasons. As my digital footprint grew this became silly and so some friends convinced me to change it. Response has been positive (maybe you can't really tell. Would anyone tell me it was bad?) People of said they are glad to see the 'real' me Centralizing power & I think it adds authenticity, that I stand 100% behind what I say.

Many thanks for your comment, and for reading the blog.

I take your point about authenticity, and that's one of the reasons I was concerned about "hiding". I agree that using a photo adds a degree of authenticity and lends weight to your online persona.

In the end, I decided not to change my avatar, see follow up blog post. In some sense, this is because my online self is not so much an extension of me, but rather an alter ego. It has taken me a while to figure that out, and I am still thinking about it.

Also, as one tweeter pointed out, I am rarely happy with photographs of myself.

Thank you so much for sharing this post during the #byod4lchat. It was fascinating to read about your journey in the digital jungle and the discoveries you made about yourself.

How do you explain that it seems to be easier to open-up online?

I like the avatar and I think we should share what we feel comfortable in sharing. I know what you mean when people see you in real life and recognise you from the avatar. If it represents the real you, I think you will probably be recognisable. I have seen this in other cases too.

I hope you enjoy BYOD4L and find it useful.