Reflections on Visitors and Residents as CPD in Learning Technologies module

The metaphor of the Digital Native is still very much used in academic circles - perhaps because it is easy to understand. Many academic staff feel comfortable to describe themselves as digital dinosaurs (or immigrants), separated from their students' apparent ease with technology by a gulf so fundamental that it cannot be bridged. When pushed, they do accept that students are ill-prepared to use tech in their educational lives - unable to navigate the VLE, not aware of file types, completely fazed when faced with a zip file. But still, the Digital Natives narrative persists and is accepted as a truth, an excuse.

Read Donna Lanclos on The Death of the Digital Native.

At the outset of my module on Learning Technologies (#cel263 on Twitter) I ask my group of participants - all academic staff - to reflect on their comfort in using new technologies for teaching1, by writing a group blog post. Despite including works by Donna Lanclos and David White in the readings for the module, still the Digital Native rears his head in these reflections, every year. This last month, a number of staff quite happily identified themselves as Digital Immigrants, describing their discomfort with technologies that are effortless for their students.

I think this is a good start. By explicitly articulating this in the group, in writing, it gives me a chance to gently challenge the position.

The Digital Visitors and Residents metaphor, approached through a 90 minute workshop derived from David White and Donna Lanclos excellent guidelines, allows my module participants to focus, not on the technology they use, but on how they use the technologies. By working through the mapping process, creating their own maps while working and discussing in small groups, they get to explore their own interactions and purposes. The maps themselves aren't so important, but rather the follow up questions "so what?" and "what next?" By reflecting on their own maps, each participant can take ownership of their own technology use, and purposely determine what they want to do with it.

How we did it

The guide produced by Donna and David is for a full day workshop, with a second day for more strategic use within an institution. Having participated in such a workshop, run by Donna and David last year, I found this a very valuable experience. But I only have 90 minutes, as part of the second workshop (of 7) in my module.

The first reflection, about comfort in using new technologies, is an outcome of workshop 1. And without any encouragement on my part, the Digital Natives narrative always comes up. Though commenting on the reflections, I can begin to suggest that the Natives theory doesn't work, and maybe there's an alternative.

Before the face-to-face 2nd workshop, I ask participants to watch David's short video explaining the V&R theory, as preparation. By the time I meet them, it's clear that at least some of them have watched it, and nobody admits otherwise. So, my intro can be short, referring to the video and also to their reflections. There is great hilarity as they Google each other - some definitely more discoverable than others - but everybody with a trace. 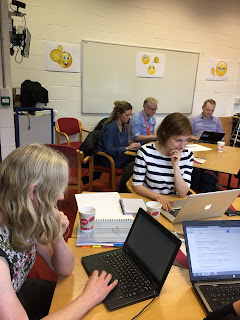 I spend some time working though the drawing of my own map, deliberately leaving out Wikipedia initially. This brings up various questions, which we discuss a little. But my intention is to get them working on their own maps as quickly as possible. They do this in small groups of just 2 or 3. Initially quiet, within 5 minutes the room is full of the sounds of discussion. I circulate, commenting and asking questions.

One observation is about whether somebody's name, in the case where it might be unusual or unique, might have an effect on how comfortably open they might be. Anything on the open web would be immediately associated with that person. Somebody with a common name might find it easier to hide.

Another group had quite a discussion around e-commerce apps and tools. While not discoverable, there was some anguish about online security of data. 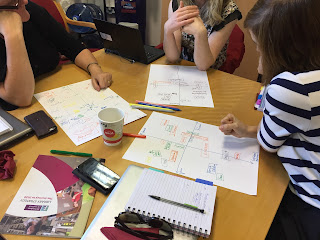 After a while, we stop and discuss a little. I draw Wikipedia onto my map, still a little to the Visitors side of the axis. We talk, in general, about the clustering or spread of activities on the maps, and what it might mean. We talk about a third dimension, which some have identified, and how they have use colours or shapes to represent this on their two dimensional grid. They spend another few minutes considering the So What?

In the last 15 minutes of the workshop we start to think about What Next? I explain my relationship with Wikipedia as a fledgling editor and how I am deliberately trying to move that block to the right of the V&R axis. I leave them contemplating the What Next question on their maps. Before they leave the room, we have a quick gallery walk. 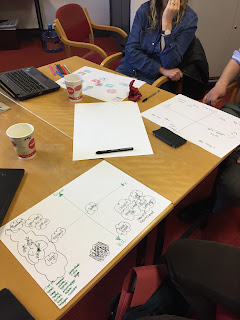 In the 2 weeks between each workshop, each member of the class writes a workshop report as a post on the group blog. This week the report is to include an image of the map with some explanation and a consideration of the So What? question. It takes some time for these posts to start appearing - which may be a good sign. Either they are still reflecting, or just too busy to get around to the report.

Suddenly, a week after our workshop, there is a deluge of reports. Almost everybody indicates that the activity was of value and that they have learned something new about themselves and their technology use. Each person has identified some direction they want to take, either by eliminating some aspects or changing others.

With a group of academics who are now more self-aware and purposeful, I now have a solid base to begin exploring the use of technology in teaching and learning. I look forward to the many discussions over the next 5 workshops.

I have asked my group if I might share some of the comments from their workshop reports. None of the participants are identifiable from the comments.

"In order to construct the V&R map, I had a think about where I go online – and one thought usually led to another, and there's certainly some things I've left off."

"This activity was extremely useful to me in relation to getting an accurate idea of my use of online tools."


"I wasn't aware that I was consistently using so many tools and I also underestimated my visibility online."

"Upon first consideration, I foolishly thought there should be a clear divide between my personal and institutional online activities. However, as I started to give it some attention, I found that while some activities were clearly separated into different categories, there was more overlap between groups than I had expected."

"In the first report, I wrote that I consider myself a beginner in terms of using technologies in teaching. After creating the map last Friday and after a few days contemplation since then I am not so sure any longer."

"By using David White’s system of mapping ones online activities, I have been able to clearly see how I interact with the web, and the roles that my online activities play in both my personal and work life. That brings me to the stage of thinking how I might be able to use the web in more effective ways."

"I was surprised by the way this exercise helped me to articulate my feelings towards email. It is by far the biggest influence on my life and it has become almost uniquely work-related."

[1] The prompt for the first reflection is:

Write a short report (no more than 3 paragraphs) answering the following question:
How would you describe your level of confidence in using and learning new computer based technologies?