I've been "attending" some of the webinars in the iClicker Pedagogy Webinar series over the last few weeks. They are organised for 1:00 EST, which translates to 6pm Irish time. If I race home from work, I can just about catch them while watching over the kids.

On 25th January, Roger Freedman (@RogerFreedman), Physics lecturer and clicker enthusiast, talked on the topic of Clickers in the Classroom: Pedagogical Best Practices. Roger gave a lovely presentation, making a compelling case for using clickers and demonstrating that there can be a significant learning gain from integrating them into teaching. The webinar was probably more suited to people getting started with clickers, but it was very interesting to see some of our experience here in NUIG being mirrored in what Roger was saying. 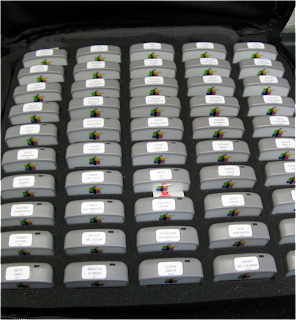 In September 2010, 762 clicker devices were distributed to incoming first year undergraduate Science students and Foundation Medicine students at NUIG. In addition, 40 RF receiver devices were distributed to academic staff involved in the initiative. The aim of the project, led by the NUIG College of Science, was to use clicker devices in lectures to promote student intellectual engagement and also to increase attendance. CELT was involved to provide advice, training and support for academic staff during the year.

In March 2011, we invited student feedback on the use of clickers using an online survey. A total of 272 students responded, giving a 35% response rate.

What did they like?
When asked about what they liked about using clickers, a large number of students (71%) made some reference to active learning ("It made me sit up and think"). Smaller numbers of students mentioned anonymity as a positive, while 2 students mentioned social aspects - that clickers helped them get to know other members in the class.

What did they not like?
When asked what they didn't like, the responses were more diverse. A significant number (19%) said that the clicker questions were disruptive, that other students would start to chatter and it could take some time for the lecturer to regain control. Some students (12%) thought that the questions were not always being used well (questions too easy, questions too hard, trick questions) while about 7% of respondents thought that the clickers weren't being used enough.

None of the students appeared concerned about not covering material in lectures.

Attendance and Participation
In his talk, Roger noted the difference between Empowering and Compelling students to use clickers. They work best as a learning tool, and students prefer the formative feedback they offer, over grading or tracking attendance. 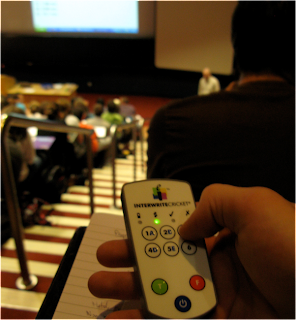 
Outcomes of the initiative
In the survey, 79% of respondents said that the system should be used with first year students again, with 9% saying no. In fact, the College decided to expand the scheme and in September 2011 all first and second year students were provided with clicker devices.

One of the aims of the project was to promote intellectual engagement. From the student responses to the survey, active engagement is reported as an outcome. This may be due to the use of the clickers themselves, the changed teaching practice as a result of the use of clickers, or just a novelty factor associated with the devices. The student feedback supports findings from more substantive studies in the literature that clickers can play a positive part in student learning.

Have you found that students who used clickers regularly performed better in examinations?

In my Department, a number of instructors have a practice that eliminates those 19 students complaining about their clickers not working (as well as the small crowd of students who swarm the instructor at the end of each class, making excuses for why they were unable to click today.) We tell them that if they participate in 85% or more of the peer instruction episodes throughout the term, they'll receive a full participation credit (5 out of 5, in your case.) It means students can miss about 1 in 6 episodes: perhaps 1 question that day. Or 1 entire class every couple of weeks. All the time-consuming conversations about batteries, forgotten clickers, doctor's appointments...they all go away!

Thanks Peter, for your comment. This is a good approach, I think, and allays fears about missing a lecture for whatever reason. I believe that the Physics lecturers do use a rule similar to this, but must follow up with them to find out.

Anonymous, that's a difficult conclusion to draw. What we did find is that regular use of clickers increased attendance at lectures. And, of course, we know that students who attend lectures regularly tend to perform better in exams.

Sharon- massive thanks for sending me the link to this via Twitter:)

It seems that students were tracked to ensure that they were there and participating. But was anything done about how students actually performed? For example, was it possible to identify struggling students and was any action then taken?

Thanks for reading, Anne Marie.

I suppose there are two levels of struggling students, and neither was tracked particularly.

The first is the set of students who didn't attend. This would have been clear from the data collected and offers opportunities for follow-up. Our university has been putting increased efforts, in the current year, into attendance monitoring and I could see how the clicker data could help here. For the study we did, however, this was not a factor.

The second level of struggling students is the set of students who consistently get a higher proportion of "wrong" answers. Again, this wasn't tracked in the year of our study. The students themselves were clear that they didn't want the clickers to be used for assessment, and that choice had to be respected.

This does, I think, related back to the pedagogic use of clickers. It's fine for students to get the answers "wrong" if they then learn from it (which would not happen if clickers weren't being used). When the clickers are being used to promote pedagogic practice, for example in peer learning, then you could see it as a positive thing that they get the answers wrong. This gives immediate feedback to the lecturer, who can intervene in some way; or through peer discussion the struggling student can learn.

Does this answer your question at all?

Hello,
Yes very helpful. I asked as a student commented on Twitter that he found it shaming to get answers wrong in a public space even if no one else knew.
He suggested that he thought unlikely someone would come forward for help so maybe best for students to be followed up by staff. I wondered if you had come across any stories that reflected this.
Many thanks again
AM

that is interesting. One of the benefits of clickers is that a student, who may think he's doing ok, gets an early warning that maybe he's not keeping up with the class.

Where does the responsibility lie for this student's learning? Through the use of the clickers, the teacher has provided an opportunity for this student to do something about the situation - perhaps on his own or perhaps to approach the lecturer for help.

But if it now becomes the lecturers responsibility to follow up with the student, I would be concerned that it promotes further passivity on the part of the student.

Interesting stuff! Thanks for prompting me to think about this.